“May your walls know joy, may every room hold laughter, and every window open to great possibility.”

It’s beginning to look a lot like Christmas… all over the world! We’ve ventured to our favourite international cities to find out what they’re bringing to the window this holiday season in their custom displays.

If you’re searching for a bit of magic this Christmas, look no further than the whimsical, circus theme found behind the glass of Bloomingdale’s in New York City. Depicting scenes from the much anticipated “The Greatest Showman” film, Bloomingdale’s six windows are flooded with over 7 million Swarovski crystals. While characters pose and come alive among the glitter and lights, Bloomingdale’s topped it off with interactive elements.

The circus and fairground theme also made its way to Paris this year, where the legendary Galeries Lafayette collided art deco and surrealism to produce a whimsical story of 20th century Paris. The synthesis of a mauve and magenta sky backdrop knits together the magical carnival scene.

As we travel over to London, we’re bought back down to earth, or rather, under the earth as the British retail elite, Selfridges and Fortnum & Mason pay homage to the traditional English Christmas dinner. Colliding humor and tradition, Selfridges decked out one window in thousands of the pocket-sized green vegetable; the brussel sprout. Other windows featured carnival floats celebrating eccentricity and creativity through banners and even an over-sized robin.

Fortnum & Mason in London’s Piccadilly joyfully takes us all home into the kitchen but with a twist of imagination. Windows featuring a boy riding a brussel sprout, and an elephant popping champagne bring inanimate objects to life and reference their “Together We’re Merrier” campaign.

Our Christmas window travels end with a bang in Harvey Nichols, London. A dazzling scene of rainbow colours, LED lights and luxurious gift ideas fill the London store windows. Star and bauble motifs bring the electric spectacle back to Christmas yet rotating disco balls anticipate the festive party season. Eye catching and energetic, Harvey Nichols sure knows how to capture an audience. 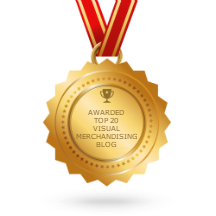